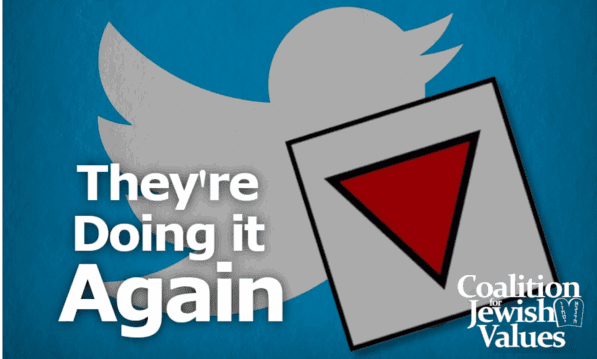 By that time, Mr. Feldman already knew that CafePress.com was selling an inverted red triangle car magnet tagged with all of “Antifascist,” “Antifascism” and “Antifa.” He knew that if anyone was to blame for the recycled use of a Nazi symbol, it was those Antifa members and fans who used it to identify themselves, and not the Trump campaign that then used the symbol used by Antifa members and fans to identify Antifa.

And I know that he knew this, because I pointed it out to him when he called to ask for my thoughts on why the great and evil Orange Man had used a Nazi symbol in his campaign. [He asked for the interview by email first, enabling a moment of research. And, of course, CafePress wasn’t alone.] But it didn’t matter – he followed his narrative, regardless of pesky facts.

Mr. Feldman, of course, is not alone. Facebook removed the Trump ad, and the media had a field day with the latest “anti-Semitic dog whistle” supposedly used by the Trump campaign. Never mind that the symbol was used by the Nazis against political prisoners rather than Jews. Never mind that both Twitter and What’s App provide untold millions of users with the ability to add this purported Nazi symbol to anything they write. And, of course, never mind that any blame would logically have to be ascribed to Antifa. 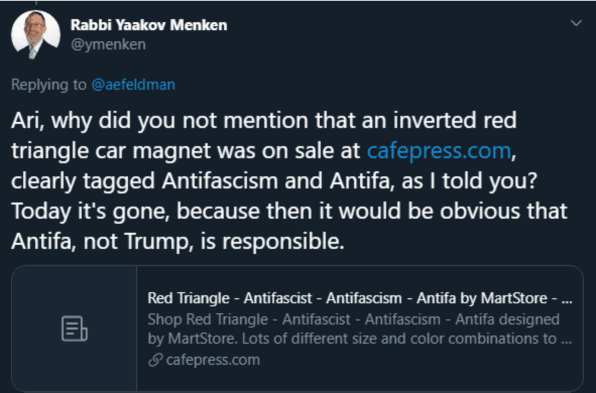 It was a chance to claim Trump was anti-Semitic, and that was all that mattered.

This is only the most clear and obvious example of a “dog whistle” requiring such sensitivity that no rabbinic expert in the nature of Anti-Semitism has ever noticed them – but which left-wing reporters with no knowledge in Anti-Semitism to speak of are able to recognize immediately. It involves the phenomenal ability to identify Anti-Semitism when politically advantageous, regardless of accuracy.

This is not a political matter. It’s incredibly dangerous for Jews.

And that is why it is so important that we are in this fight, and so important that you join us with your support. Without our presence, it is likely that no media would have presented a sensible and contrary view. With your support, it can be mainstream outlets, not only Jewish ones, that take our critically important perspective into account. By ignoring true Anti-Semitism and focusing upon their partisan inventions, the media will make all Jews less safe. Your help is critical for fairness, sanity and even safety.