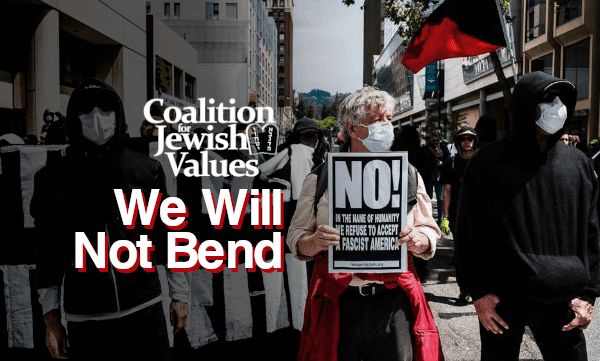 It is surely no coincidence that Tablet Magazine’s detailed and terrifying report on Bend the Arc and its “constellation of activist groups” emerged just prior to a wave of violent riots sweeping the country. More like Divine Providence: we learn both who they really are, and what will happen to America if they get their way. It is urgent that we stop them, and that is why we need your immediate support.

You’ve almost certainly heard of Bend the Arc; this “Jewish” organization is a darling of the leftist media, and also flush with cash. “Bending the Jews” is a long article, so I’ll excerpt a few key lines you truly must read:

What has made Bend the Arc such a singular and attractive investment worth tens of millions of dollars for philanthropic elites who, according to their own financial records, are otherwise unengaged with the well-being of American Jewry? A close look at Bend the Arc’s work over the years would suggest that such an investment was designed not to advance American Jewish life, but rather, to obtain and cement Jewish-branded support for progressive political causes.

So despite Bend the Arc CEO Stosh Cotler’s claims to “reflect and represent what the majority of American Jews believe,” Bend the Arc is hardly a grass-roots effort. It owes its prominence to the PR benefits of making contempt for traditional Biblical values into a “Jewish” issue.

In other words, Bend the Arc is a front group richly funded by left-wing foundations with no interest in the well-being of the Jewish community. On the contrary, their goal is to exploit Jewish ignorance to destroy America’s moral foundation.

History is replete with examples of Jews used as figureheads to harm the Jewish community, Jewish values and the national interest. One wonders if the writer who described Bend the Arc as the “Jewish section” behind the progressive platform realized that he had just translated the name of the infamous Soviet Yevsektsiya into English. Either way, he was not wrong to do so.

These are not groups that want dialogue or discussion — because in a sober discussion of common ideals and basic moral values, they lose. On the contrary, groups such as IfNotNow, Bend the Arc’s anti-Israel “Jewish” collaborator, refuse to debate in favor of deliberate disruptions and protests designed to prevent others from being heard.

Here’s a tip: a good way to avoid comparisons to some of history’s most vicious anti-Semites would be to not mimic the Sturmabteilung. You would think that was obvious, but you know what they say about those who don’t learn from history. All that is needed for darkness to fall in America is for groups like these to go from being arrested to being permitted to flourish.

And on the streets right now, we see what being permitted to flourish looks like. Who among us was not sickened by the murder of George Floyd? But who is not sickened to see his death misused to destroy our cities? Violent radicals are assaulting others, vandalizing and destroying property while minority home and business owners cry over the loss of everything they have worked for… due to a “protest” purportedly expressing concern over minority lives.

We will not bend, and we will not buckle. We will call out anti-Semitism and bigotry, and — specifically because of who we are — we have unique credibility to inform Americans that Bend the Arc and their ilk stand categorically opposed to Judaism and our fundamental values. We will stand against this well-funded mob — but we cannot be heard without your help. Your help is needed to keep us in the fight. Thank you.