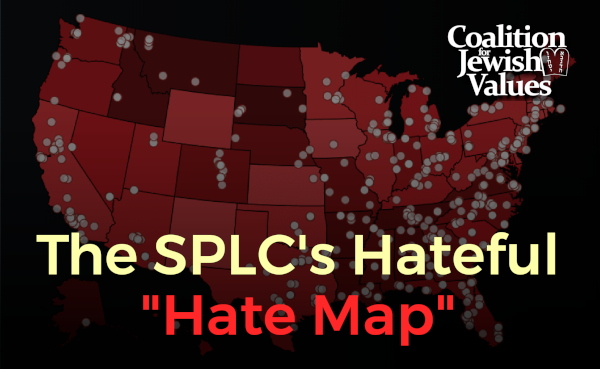 When a friend of ours and her organization were slandered for their support of the Jewish community, we knew we had to act. The Southern Poverty Law Center (SPLC) lashed out, calling her organization an “Anti-Muslim” hate group. They didn’t even bother to explain what she had said that qualified as hateful towards anyone; she has merely distinguished herself as a leading proponent of Christian support for Israel.

We composed a letter, intended to be signed by allies in the larger conservative community who had yet to be so “honored” by the SPLC. But then, when he testified before a hearing in the House of Representatives, Jeff Bezos was grilled on the use of the SPLC “Hate Map” by AmazonSmile, the Amazon charitable giving program, to determine whom should be denied access. And late last month, members of the House Judiciary Committee asked him for a briefing on this specific issue.

So we quickly modified our letter to focus upon the unique danger that the SPLC list poses to the Jewish community, to dovetail with the letter from Members of Congress. No radical Islamic terror group is listed. None of the American groups that support their hate are listed, so they receive funding. Those who defend our safety do not. If it is not intentionally hateful, the SPLC “Hate Map” is certainly Antisemitic in effect.

Within a matter of days, over 100 rabbis had signed on to our letter. Among them are names those familiar with the Orthodox rabbinate in America will surely recognize. We were honored to have their support when we mailed our letter.

Our letter to Mr. Bezos was shared with a reporter at Fox News, one who has repeatedly covered the lack of fairness and naked partisanship of the SPLC. The result was a front-page article that dominated the US, Technology and Faith & Values sections of foxnews.com. From there it spread to PJ Media, the Federalist, and beyond.

This is the CJV, and why your support matters so much. The CJV steps forward to defend our values and our community, all from an authentically Jewish perspective. This is hardly the only battle in which we find ourselves, and this particular effort took months to arrive at this juncture. Your support keeps us in the fight – so thank you in advance for your support.