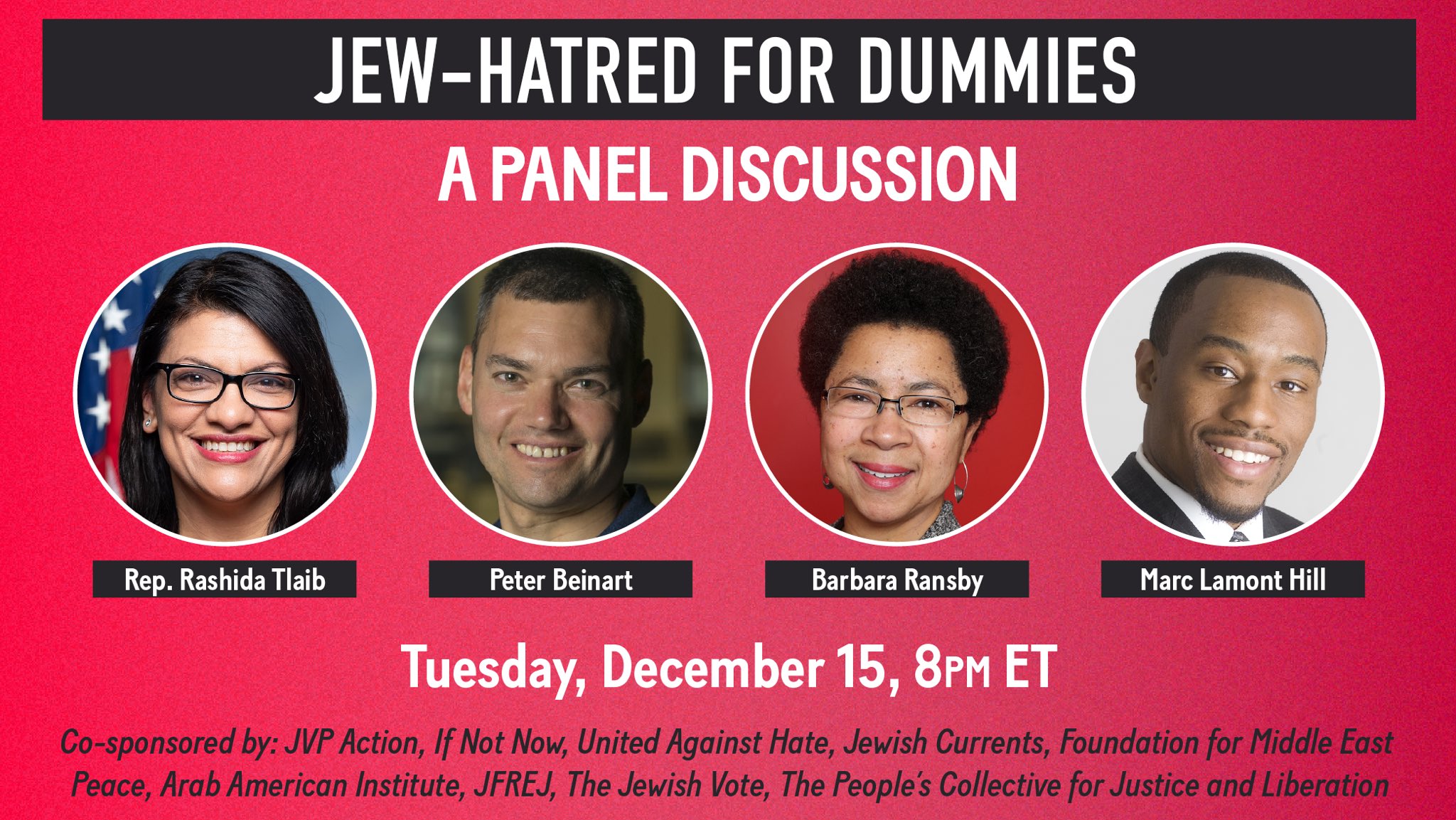 The Coalition for Jewish Values (CJV), representing over 1500 traditional rabbis in matters of public policy, today condemned Jewish Voice for Peace (JVP) for its disinformation campaign designed to cover for modern Antisemitic hatred. Most recently, JVP Action announced an upcoming webinar with several co-sponsors, featuring well-known activists purportedly speaking on “Dismantling Antisemitism, Winning Justice.” None of the panelists are scholars of Antisemitism; all are guilty of spreading it.

Rep. Rashida Tlaib promotes groups that endorse terrorism, and was barred from entry into Israel for her support of boycotts intended to starve and destroy Israel. Peter Beinart, the sole Jewish panelist, endorses Israel boycotts nonetheless, and this summer penned a NY Times op-ed entitled “I No Longer Believe in a Jewish State.” Barbara Rasby, a professor of History, African American Studies and Gender and Women’s Studies at the University of Illinois at Chicago, both supports Israel boycotts and collaborated with Rasmeah Odeh, who murdered two Hebrew University students in 1969, in an op-ed blaming others for inciting violence. And Marc Lamont Hill, a professor at Temple University, was rebuked by the university and fired from CNN after calling for a “free Palestine, from the river to sea,” the anti-Israel catchphrase of the Hamas terror organization, in a speech at the United Nations.

“Apparently Louis Farrakhan and David Duke were unavailable,” commented Rabbi Ze’ev Smason, Midwestern Regional Vice President of the CJV. “With this event, JVP continues its campaign of toxic apologism for Antisemitism. It is both ludicrous and offensive that Jewish or non-Jewish individuals who call for the undermining of Israel and sympathize with anti-Israel violence should arrogate to themselves the right to fairly discuss ‘dismantling Antisemitism.'”

Neither was this atypical. JVP routinely works together with anti-Israel groups and individuals, shielding them from charges of Antisemitism.

“While having a quartet of Antisemites speak on ‘Dismantling Antisemitism’ may seem extreme,” said Rabbi Yaakov Menken, Managing Director of the CJV, “this is consistent with the overall agenda of the misnamed Jewish Voice for Peace: to provide a figleaf for Antisemitism. It would be impossible for an organization that openly honors murderers and terrorists, like Students for Justice in Palestine, to escape well-deserved censure and revulsion were JVP not providing cover for its hate.”