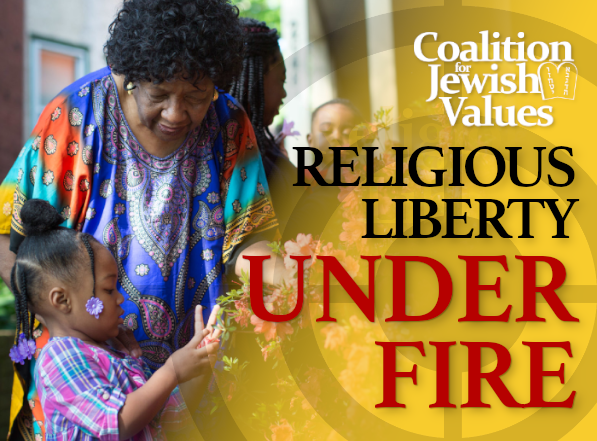 When religious liberty is threatened, we all lose.

The case of Fulton v. The City of Philadelphia is a dramatic example. The City of Philadelphia recently put new rules in place for foster care, requiring religious groups like Catholic Social Services (CSS) to declare same-sex couples to be suitable hosts for foster children — contrary to their religious beliefs — or be excluded from foster care entirely.

You know who loses most of all? Children. Specifically, the children now sitting in group homes, rather than placed with loving families, because Philly won’t let CSS do the work it has done for over 200 years. The ACLU is literally claiming that it would mentally harm same-sex couples to be referred by CSS to a different agency, so much so that having children left in group homes is a better outcome.

It is a national embarrassment that this sort of nonsense was argued by lawyers for the City before the Supreme Court last month.

The Coalition for Jewish Values filed an amicus brief to combat this bigotry and defend religious freedom. As a Jewish organization, our voice may make a particular impression on Justice Elena Kagan, who claims to value her religious heritage. I’ve also written an op-ed outlining the risks the ruling poses to vulnerable children, devout foster families, and society as a whole, which should be published later this month.

Our voice at this juncture is critical; we must sound the alarm on threats to religious liberty before we lose it — no matter which organization is targeted. We cannot wait until we are directly targeted, as synagogues (and Catholic churches) recently were by Governor Cuomo in New York.

The most significant danger to the free exercise of religion today comes from those who would permit no religious exercise at all. The ACLU once defended religious liberty; now it aims to trample it. It is vital that we stand in defense of equality and freedom for religious institutions and people of faith.

It’s Giving Tuesday. Your one gift can help to uphold Jewish values, religious liberty, and America’s most vulnerable children. Thank you in advance for your generous support.