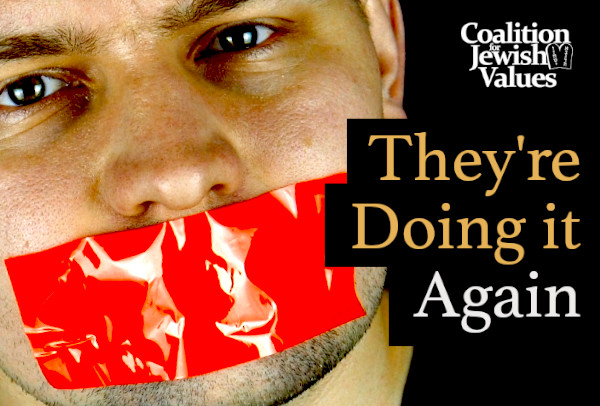 The left cannot abide a voice that opposes their agenda.

With increasing frequency, “Orthodox” rabbis have been featured in the media espousing beliefs and practices opposed to the core tenets of traditional Judaism, especially related to same-sex marriage. Their plan goes beyond mere publicity. Look at what happened after the Supreme Court’s Obergefell decision: the claim that “Orthodox” rabbis perform same-sex marriages goes hand-in-hand with tarring rabbis who refuse to do so as motivated by “homophobia” rather than religious principle.

So we created a statement for observant rabbis to sign, pointing out the simple truth that one cannot be an Orthodox rabbi and perform a same-sex marriage (or similarly to ordain women, or challenge Divine authorship of Torah). To be Orthodox and to do these things is self-contradictory. And this statement has been extremely successful: not only have nearly 250 rabbis already signed, but the signatories include many outstanding Jewish scholars and leaders.

Yet it also gave the left another chance to demonstrate that they are happy to call people hateful and bigoted for simply acknowledging reality. It is not as if the Torah’s opposition to homosexuality is subtle — and the statement limits itself to stating that one who supports such marriages is not Orthodox. To these activists, even quoting the Torah is a bigoted act.

When they learned of our statement, they submitted a barrage of fake “signatures” including foul language, the names of known “LGBTQ” activists, and accusations that such a statement is “homophobic.” Other false submissions were more subtle, seeking to discredit our campaign by incorporating fictional characters in our list of distinguished signatories.

This was a transparent attempt to silence opposing voices and suppress open debate. Somehow, we didn’t see people submitting fake names or harassment when, as recently transpired, left-wing clergy circulated a letter denying that imagery of Israelis hunting down “unarmed Palestinian sisters and brothers like birds of prey” is classically Antisemitic.

But we also learned that these people are cowards. They targeted our effort, even when we stated on the form that we would share with you, our supporters, their campaign of harassment and deceit. But they stopped immediately when we displayed the visitor’s Internet IP address on the form. Every visit to every website is logged, but somehow they were deterred when we pointed this out.

Why do they feel so threatened by our efforts? Because if there is an open and sober discussion of traditional Jewish values, they lose. Now, more than ever, we must be heard. Please support our critical work!