The Christian Post: God’s will ‘is no concern of this Congress,’ Democrat Jerry Nadler says during Equality Act debate
March 2, 2021 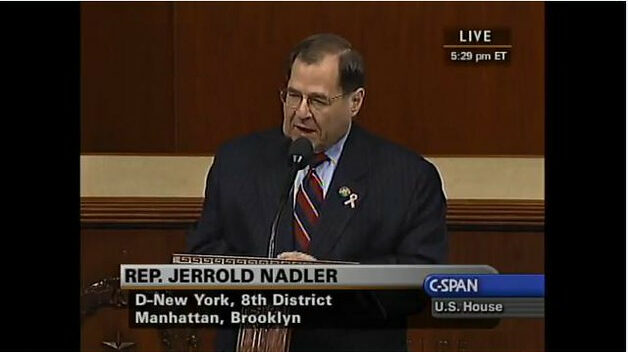 Democratic Rep. Jerry Nadler of New York chastised one of his colleagues for mentioning God and the Bible during the House debate over the Equality Act Thursday, saying: “God’s will is no concern of this Congress.”

Rep. Greg Stuebe, R-Fla., said in his remarks on the House floor that the Equality Act is in opposition to Scripture.

“The gender confusion that exists in our culture today is a clear rejection of God’s good design. Whenever a nation’s laws no longer reflect the standards of God, that nation is in rebellion against Him and will inevitably bear the consequences,” Stuebe said.

“And I think we are seeing the consequences of rejecting God in our country today. And this bill speaks directly against what is laid out in Scripture,” he declared.

The Equality Act passed in the House by a vote of 224-206 with only three Republicans — Reps. Tom Reed and John Katko, both of New York, and Brian Fitzpatrick of Pennsylvania — joining Democrats in voting for the measure.

Among the most contested aspects of the bill is the enshrinement of sexual orientation and gender identity as categories in civil rights law. The bill is an update of the 1964 Civil Rights Act that is considered by many to be the legislative legacy of Dr. Martin Luther King Jr.

“It’s not clothing or personal style that offends God, but rather, the use of one’s appearance to act out or take on a sexual identity different from the one biologically assigned by God at birth,” the Florida congressman added in his speech Thursday.

The 500-plus page Equality Act adds gender identity as a protected category in nondiscrimination law. That term, which is frequently used by media and transgender activists, refers to an “internal sense” of one’s gender.

Opposition to the bill has manifested from across the political spectrum.

Both conservative-leaning women and left-wing radical feminists have maintained that simultaneously protecting sex and gender identity within the law is impossible because gender identity has, unlike sex, no material meaning.

Enshrining the concept into federal law would destroy women’s sports and other sex-segregated spaces such as shelters for women escaping domestic violence, rape crisis centers, and any other entity that receives federal dollars, opponents have warned.

The Equality Act also forbids use of the Religious Freedom Restoration Act (RFRA), a 1993 law that was passed on an overwhelmingly bipartisan basis and signed into law by former President Bill Clinton to provide religious exemptions.

In His response to Steube on the House floor, Nadler said: “Mr. Steube, what any religious tradition ascribes as God’s will is no concern of this Congress.”

According to the Coalition for Jewish Values, a group of approximately 1,500 traditional Orthodox rabbis, the New York congressman has “forgotten the Constitution.”

“The Founding Fathers required Congress avoid infringing upon the free exercise of religion, meaning it must be sensitive to what every religious tradition describes as G-d’s will,” said CJV President Rabbi Pesach Lerner in a statement, according to PJ Media.

“It is especially true that Congress must remain cognizant of the set of foundational moral principles — including valuing peace, human life, and individual liberty and responsibility — that America calls Judeo-Christian ethics.”

“Far from valuing diverse opinions and beliefs, it tramples free exercise of religion and even demonizes free speech. Reading the Bible in public, per the Equality Act, could be called an exercise in bigotry and grounds for a ‘discrimination’ complaint. Without question, the true bigots here are those who support deliberate attacks upon the cherished beliefs of others,” Schonfeld said.