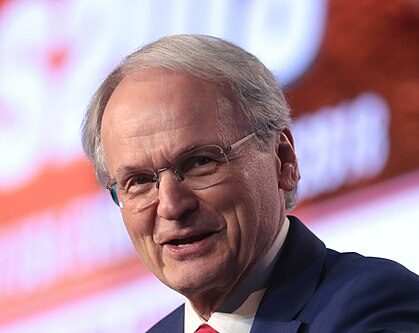 Perhaps most notably, CJV condemned J Street for an “an anti-Semitic double standard” in smearing Klein while inviting Palestinian Authority President Mahmoud Abbas to address its conference as an honored guest.

The campaign against Klein dates back to September 2020, when members of the Jewish Community Relations Council (JCRC) of Boston petitioned to remove ZOA from the JCRC, which includes dozens of local groups and community members representing virtually every Jewish constituency in Boston. Left-wing groups including Kishet, Hillel, the Jewish Labor Committee, and J Street led the petition, which condemned Klein for “rhetoric… that crosses into xenophobic and racist territory,” including amplifying “antisemitic conspiracy theories” regarding George Soros.

“American Jewish institutions must make clear that Klein’s pattern of abuse and bigotry can have no place in our Jewish communal life,” the petition declared.

The JCRC launched an investigation and a committee concluded that Klein had “elevated white supremacist voices.” The board did not recommend ZOA’s expulsion, however. “Given that ZOA is a longtime member of the Council, has a long history as an influential national organization, and continues to represent a meaningful segment of the Boston Jewish community… there was consensus that, despite the concerns summarized above, expulsion at this time would not serve the interests of JCRC or the broader Jewish community in Boston,” the report said, the Jewish Telegraphic Agency reported.

The recommendation will go before the entire council for a vote on April 27.

Klein has rejected the complaints against him and said he stood by all of his social media activity under investigation, The Times of Israel reported.

These aggressive politically-charged statements are debatable, to say the least, but none of them are racist, per se, much less white supremacist.

The Coalition for Jewish Values addressed the accusations against Klein in a letter to the JCRC on Thursday.

“The ‘charges’ against Mr. Klein repeatedly beg the question: they assume not only that a particular opinion is correct, but that any opposition is inherently motivated by hatred and bigotry,” CJV President Rabbi Pesach Lerner and CJV Managing Director Rabbi Yaakov Menken wrote in the letter. “The complaint combines a demand for ideological conformity with demonization in place of debate, besmirching the JCRC’s reputation as a democratic and deliberative body.”

“For example, the complaint asserts that it is ‘bigoted’ to describe Ilhan Omar and Rashida Tlaib as hating Jews and supporting terror. It simply presumes that Mr. Klein’s objections are connected to their identity characteristics,” Pesach and Menken explained. “This is absurd. [Former Ku Klux Klan leader] David Duke does not back Ilhan Omar because of her identity, but because he shares her hatred of Jews.”

“Mr. Klein denounces both Omar and Duke for precisely the same reason, and thus to pin his opposition to Rep. Omar’s skin color, religion or any similar factor is simply slander,” the CJV leaders argued.

“Rep. Tlaib recently called Israel ‘racist‘ because the Palestinian Authority refused to work with Israel to obtain vaccines for its citizens. Condemning this antisemitic lie is factual and not bigoted… while using her identity characteristics to try to reverse hater and hated most certainly is,” Pesach and Menken noted.

“Similarly, the complaint claims that describing Black Lives Matter leaders as ‘filled with hatred against Jewish people’ is a ‘bigoted’ statement,” the leaders continued. “This demands we pretend that it is not hateful to assert, for example, that Israel is committing genocide, an antisemitic (aka Jew-hating) lie found in the Black Lives Matter platform. It is both ridiculous and odious to accuse someone of bigotry for merely saying something which is factually true.”

The CJV leaders issued a full-throated defense of Gorka and a condemnation of the accusation that Gorka is connected to Nazism.

“Having met with Dr. Gorka, and having studied both his history and record of concern for Jewish safety both in America and overseas, we find this accusation both baseless and repugnant,” they wrote. “To claim that everyone honored with the Order of Vitez, founded in 1920, should be associated with evil due to the brief Nazi takeover of the order late in World War II, should appall any fair-minded person. Yet Dr. Gorka’s desire to wear his father’s medal is offered as the sole ‘evidence’ of his purported white supremacy or animus against Jews.”

“So first they falsely accused Dr. Gorka, and then attempted to smear Mr. Klein for associating with the victim of their slander. How atrocious,” Pesach and Menken added.

The CJV leaders then turned to address J Street’s hypocrisy on anti-Semitism. “At the very same time that the J Street organization was leading this complaint of ‘bigotry’ against Mr. Klein, it invited Palestinian Authority President Mahmoud Abbas to address its conference as its honored guest.”

“Under Mr. Abbas, the racist murder of Jews is encouraged by official PA policy, with generous payments to the families of terrorists,” Pesach and Menken wrote, referring to the PA’s martyr’s fund, which rewards the families of Palestinians killed, injured, or imprisoned while carrying out violence against Israel. “In 2015, Mr. Abbas not only claimed that the Temple Mount is exclusively an Islamic holy site, but that the PA would not allow Jews to ‘defile’ it with ‘their filthy feet.’ He also said ‘we bless every drop of blood… spilled for Jerusalem,’ in the same interview.”

“So J Street demands that those who denounce antisemitic expression from Omar, Tlaib, and the BLM movement be censured for ‘bigotry,’ while it dignifies and honors a person who talks of Jews’ ‘filthy feet’ that ‘defile’ holy sites, blesses bloodshed and, backing words with action, generously rewards the families of those who murder Jews,” Pesach and Menken charged.

“Indescribable? No, we have a word for this: Antisemitism, the German euphemism for Jew-hatred,” they wrote. “That J Street accuses Mr. Klein while simultaneously honoring Mr. Abbas reflects an antisemitic double-standard of the first order.”

“The JCRC should be embarrassed to have entertained an accusation of bigotry that is itself tainted with animus,” the CJV leaders added.

“Certainly, a proposed ‘resolution’ demanding condemnation of white supremacy, but not of radical Islamic terror and those, such as Mr. Abbas, who reward it, would be ludicrous were its consequences not so obvious and deadly for Jews,” Pesach and Menken wrote. “We request that the Boston JCRC do no further damage to the safety of its fellow Jews by pursuing this mockery of justice.”

J Street and its allies are twisting Klein’s comments in order to brand him a racist and suggest that he supports white supremacy. This deceptive smear campaign should not succeed, and CJV is right to oppose it.