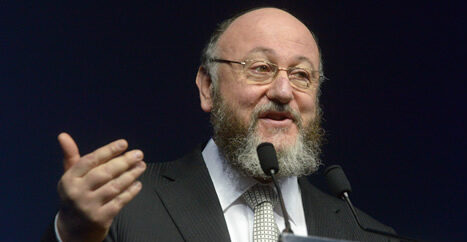 After a newly ordained female rabbi was fired from her teaching role at the London School of Jewish Studies, the Coalition for Jewish Values backed Britain’s Chief Rabbi Ephraim Mirvis’ decision to dismiss the rabbi in a letter, which garnered 1,500 signatories in support of the measure.

The reason for the dismissal was that the employee, Rabbi Dr. Lindsey Taylor-Guthartz, attended the Yeshivat Maharat Orthodox egalitarian rabbinical school in New York to earn her qualifications. The letter denounces an “Open Orthodoxy” culture that Maharat is built around and uses it as the basis of its argument.

“Coalition for Jewish Values (CJV)… lauds your decision to uphold the Jewish Mesorah (religious tradition) at the London School of Jewish Studies (LSJS), and to preserve the school’s longstanding requirement that instructors combine academic excellence with fealty to Jewish observance and belief,” said the CJV in a letter to Mirvis. “This standard required that you dismiss an LSJS Research Fellow who acquired non-Torah ‘ordination’ at Yeshivat Maharat, a school for women affiliated with ‘Open Orthodoxy.'”

Yeshivat Maharat is an Orthodox seminary that trains women as spiritual leaders and has been the target of much criticism.

The actual dismissal is attributed to the position of Mirvis, the school’s president, against rabbinical ordination for women, school employees said. It’s an issue that has become increasingly divisive in Modern Orthodox circles in Europe as an increasing number of women press for starting rabbinical studies and adding duties in Jewish communities where many believe the role should be reserved for men.

“Last December, over 250 of CJV’s member rabbis signed a statement specifically decrying this sort of false messaging. We stated at that time, in reference to ordination of women and similar ‘innovations,’ that ‘no seminary, group or institution which teaches, endorses or abides these deviations can be genuinely termed Orthodox,'” CJV said in its letter. “Such individuals and groups do not represent Orthodoxy, and cannot accurately be depicted as such.”

The Conservative and Reform movements have been ordaining female rabbis for decades. In the Orthodox world, women are barred from certain roles and all American seminaries decline to confer the title of rabbi on them. Even within the liberal Orthodox world, female clergy members face a number of limitations on the religious duties they can perform. Orthodox synagogues require a quorum of 10 men, known as a minyan, to say certain prayers, for example. A female clergy member would not count toward that number like her male counterparts.

Taylor-Guthartz, 61, who has taught at the school for 16 years, had been warned of the move to remove her title, one school employee said. She was not an employee but worked there as a freelancer, other employees said, and is still scheduled to teach two more classes.

“The decision is regrettable, but I am determined to continue to teach Torah across the community to everyone who is eager to learn,” she told The Jewish Chronicle, which first reported her story.

The school provides adult educational courses and training to the Jewish community, as well as rabbinical instruction.

Its chairman, Gary Phillips, said: “I would like to thank Dr. Taylor-Guthartz for her many years of service and we wish her all the best for the future. She is a wonderful teacher who will be much missed by both her students and colleagues at the college.”

The CJV denounced the Chronicle‘s reporting of the matter, saying it took “Yeshivat Maharat PR materials at face value,” and that it “erred grievously,” adding that the publication owes the public and the United Synagogue an apology for not “directing its staff to more accurately portray the non-Orthodox institutions of Open Orthodoxy.”

“Again, the more than 1,500 rabbis in America and beyond who make up CJV commend you for standing firmly for Torah standards and the preservation of our Mesorah – for your refusal to bow to undue pressure from those with differing ideological agendas,” CJV concluded.