Rabbi Dov Fischer in The American Spectator: Why Overturning Roe v. Wade Does Not Impinge on Stare Decisis
December 2, 2021 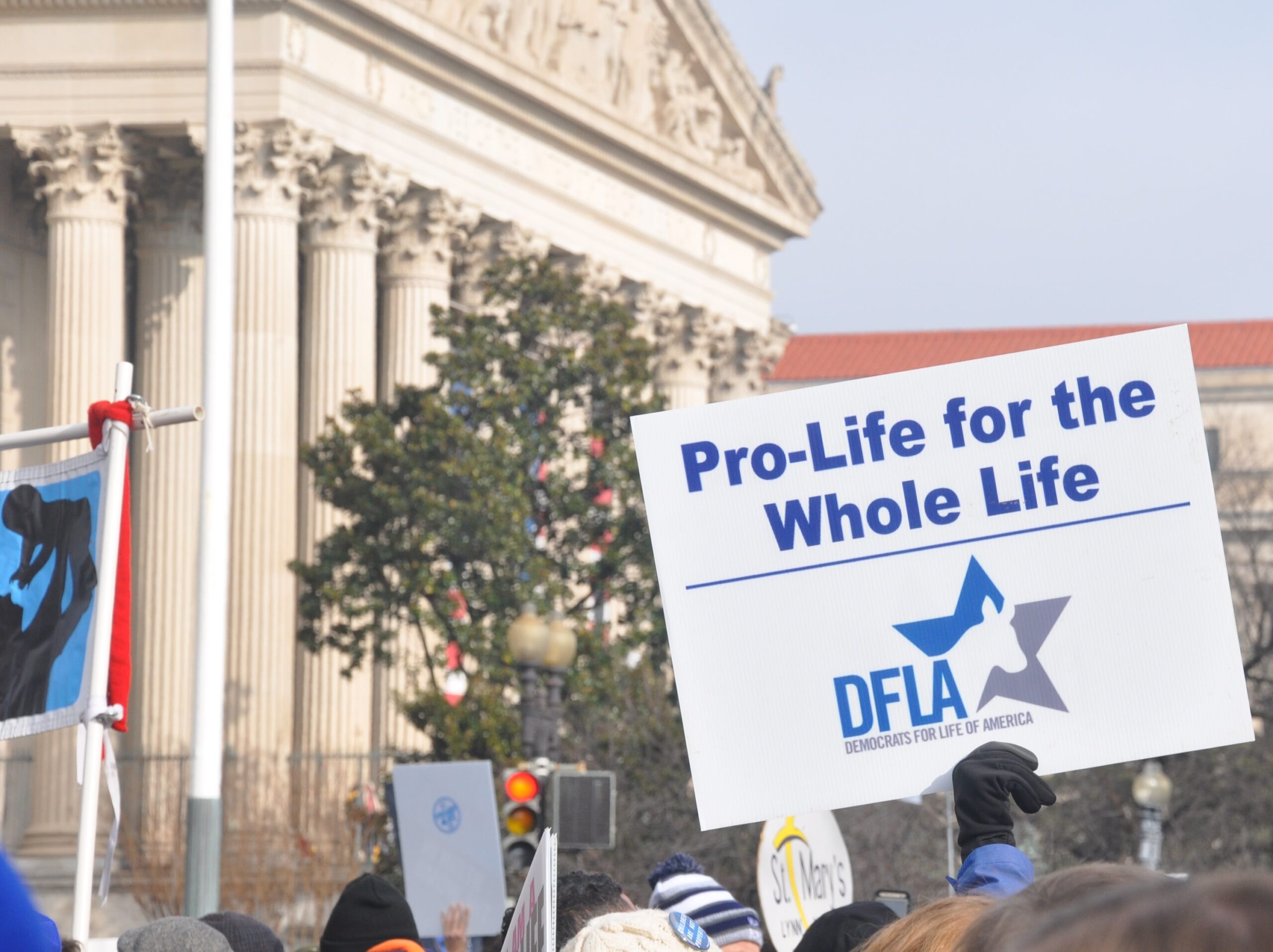 “Stare Decisis” is a Latin term and represents one of the most fundamental rules of jurisprudence. The idea is that, when a court hands down a ruling that ultimately withstands any appellate challenges, that rule is to remain the rule from now on. It should not be overturned later. The reasons are obvious. Among them:

So, for those and other reasons, we cannot have courts willy-nilly changing laws every day. Firstly, our system is constructed such that the Legislature — not the courts — make the laws. In federal parlance, we call the bi-cameral legislature the “U.S. Senate” and the “House of Representatives.” Together, they comprise “Congress.” In the states, legislatures sometimes go by different names. All states have a “state senate.” Many call their lower chamber the “state assembly.” Maryland calls theirs the “House of Delegates.” Some call the lower body their “House of Representatives.” Some refer to “the Upper House” and “the Lower House.” Nebraska uniquely has only one chamber. Whatever they are called, they are the bodies entrusted with making the laws. The courts are assigned the role of interpreting those laws when their meaning or application is disputed. Courts are not supposed to make laws.

In the past half century, the Left has found great value in turning the courts into a back-alley legislature. When conservatives or moderates control the legislature, the Left brings cases to courts that have Left-wing judicial majorities, and they ask those courts to “interpret” the laws in ways that actually will change the laws or make up brand new laws that elected officials never have enacted. It is an outrageous violation of the public trust, but the Left has gotten away with it for half a century because:

As a result of these four factors — the stupidity of one third of Americans, the ignorance of a second third, legislators’ survival instincts to remain in office by buck-passing their law-making responsibilities to Left judges eager to legislate from the bench, and the failure of Republican presidents to assure judicial balance in the courts when voters gave them the chance to offset Democrat Left extremes — the Constitution has been upended for some half a century. When criminals are read their “Miranda rights,” those warnings stem from three ground-breaking cases: Escobedo v. Illinois, 378 U.S. 478 (1964), Gideon v. Wainwright, 372 U.S. 335 (1963), and the eponymous Miranda v. Arizona, 384 U.S. 436 (1966). It should have been Congress, not judges, who made those laws. But the Left found that their judges do it faster and better. Therefore, instead of Congress, the U.S. Supreme Court, in an opinion written by a Nixon appointee, Harry Blackmun, legalized abortion in Roe v. Wade, 410 U.S. 113 (1973). The U.S. Supreme Court, in an opinion written by a Reagan appointee, Anthony Kennedy, legalized gay marriage in Obergefell v. Hodges, 576 U.S. 644 (2015). The U.S. Supreme Court, in several opinions written by Nixon appointees, primarily Lewis Powell joined by William Brennan and Harry Blackmun, legalized affirmative action in Regents of the University of California v. Bakke, 438 U.S. 265 (1978).

Which brings us to the U.S. Supreme Court decision that will be forthcoming in the Mississippi abortion case now before SCOTUS.

In truth, Roe v. Wade was sort of illegal. Not only was its logic profoundly faulty and was so much of it just fabricated based on corrupted legal readings that never before had been applied to the laws cited, but it was outside the proper purview of the Court to set abortion law in the first place. That was and is the job of Congress and — actually, more properly — of state legislatures. The U.S. Constitution delegates certain areas of responsibility to the federal government, and reserves a great many areas of law exclusively to the individual states. Thus, the federal government is responsible for minting currency, military and maritime law, regulating commerce between and among the states, and such. By contrast, laws regulating contracts, property disputes, most torts (wrongful acts) like slips-and-falls and trespass and defamation and business interference, and crime matters are left to the states. That is why the rules governing bail, prison time, and even capital punishment differ from state to state. That is why drivers’ licenses and marriage licenses are obtained from and recorded respectively by DMVs and by state registrars, not the federal government. As with marriages — including gay marriages — abortion likewise is a matter properly for the states. One state may severely restrict abortion while another state — say, Virginia — can legalize abortion and even can test the laws by going “Full Ralph Northam” and legalize murdering babies after they are born, as long as they are kept comfortable. (A great tourist slogan: “Virginia Is for Baby Killers. Enjoy the Quiet!”)

Although Roe v. Wade actually was illegal, it also paradoxically was not, could not have been, because the Supreme Court did it. Whatever the Supreme Court says or does is legal, even if it is not. (As with the presence of two doctors — a paradox…) Inasmuch as Roe has been the law of the land for the past 48 years, the rule of stare decisis makes it very hard — and possibly very wrong — to just blow it off. However…

There are times when society has evolved to a greater awareness and an awakening — not “wokeness” but a deeper moral awakening — and realizes that a prior court ruling not only had been flat-out wrong but even immoral. Thus, in Dred Scott v. Sanford, 60 U.S. (19 How.) 393 (1857), the U.S. Supreme Court not only upheld core aspects of slavery by a commanding vote of 7-2 but Chief Justice Roger Taney produced some of the most horribly racist language in his majority opinion. In Plessy v. Ferguson, 163 U.S. 537 (1896), the Court upheld segregation by robustly endorsing “separate but equal” laws. Yet, notwithstanding stare decisis, we long since have rejected both those Supreme Court precedents. See, e.g., Brown v. Board of Education of Topeka, 347 U.S. 483 (1954). So there is a time and place to overturn the worst case holdings.

Yet, that consideration need not even be part of the equation with overturning Roe v. Wade. Even under the rule of stare decisis, Roe v. Wade is what we law professors and attorneys call “bad law.” It was handed down in its time based on the antediluvian scientific knowledge available half a century ago. However, as Al Gore and Ocasio so persuasively have argued: We must follow the science. And the science is settled. At the time of Roe v. Wade it was not known that fetuses can experience the levels of pain that we now know definitively they can. It was not known that fetuses can be viable so much sooner than was thought. Extraordinary advances in ultrasound monitoring and in related areas of medical technology and pre-natal care have upended so much of what was thought incorrectly half a century ago. The matter may be compared to a Supreme Court ruling that bans the U.S. Navy from compelling its service men and women from sailing too far east or west, lest they fall off the edge of the earth. And then, after years of contemplating our navels, we learn that the earth is round or oval. Of course such a law then is overturned without impinging on stare decisis. And so, just as we do not today have laws that bar our naval men and women from rowing or wading too close to the edge of the earth, it likewise now is time to bid farewell to Roe v. Wade.

After Roe v. Wade is overturned, there will remain ample blue “woke” states that will allow abortions and even will advertise for abortion tourists to come and visit: “Come see a Broadway show and don’t forget to have an abortion before you leave!” “Visit the Hollywood Walk of Fame, deposit your fetus’s remains at one of our glorious Malibu or Beverly Hills chop shops, and return home sunshine-blonde and extra endowed! Who says you’ll never eat lunch again in this town?” “Tour da sites of our famous Saaturday Nyyte Dryyve-Byye gaang shootings aand see da garahhchkees, come in gym shoes aand drink some pahhp aat Plaaned Paarenthood, aand den see Da Bears or Da Cubs before you dryyve baack or flyye home.”

So overturning Roe will generate lots of noise, but not much will change. Yes, it will be less perfunctory to kill a fetus in two thirds of the states, but there will be a world of chop shops around the country vying for the new business. We already have Black Friday, Small Business Sunday, Cyber Monday, and Giving Tuesday. Blue states can add Abortion Wednesday. People travel all over America to visit family for Thanksgiving, Christmas, Easter, Rosh Hashanah, the Passover Seder. For those with private aircraft that disproportionately pollute the planet but keep John Kerry off his bicycle, there is the annual virtue-signaling flight to Europe to mourn global warming, promise to end Western industry so that India can catch up and China and Russia can overtake us — even maybe to see Greta scowl and talk about impending doom. People travel across state lines all the time — kids for beer and raves, undocumented aliens to help Democrats with elections, Kyle Rittenhouse, Nick Sandmann, the terrorists like the Hamas ones whom Ilhan Omar and Rashida Tlaib and the rest of the Squad regularly defend. If nine-month-pregnant Guatemalans and El Salvadorans and Mexicans, with no money left after they have paid their coyotes, can make their way into this country and illegally can cross the border almost at will, then citizens here legally with a baby to kill easily can cross state lines to abort.

Stare decisis is not at play. Follow the science. Just watch out for Ralph Northam if he asks, after you have built a sweat while rowing or wading across state lines, whether you would like to feel more comfortable.