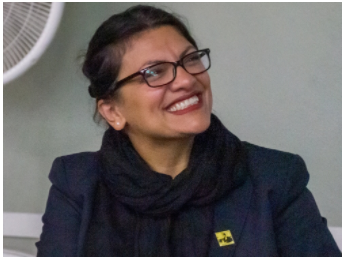 Perhaps you’ve noticed a new trend among Israel-bashers, one born virtually the moment Russian forces crossed the border into Ukraine. Israel’s enemies are drawing parallels between Putin’s Russia and the Jewish State, equating an unprovoked invasion with tiny Israel’s efforts to defend its people from annihilation. As CJV has written elsewhere, the analogy is a farce. Praised as pioneers, however, the “Squad” is taking moral inversion to new depths. 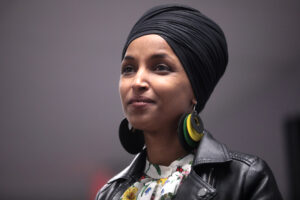 “Two of the group’s core members, Reps. Cori Bush (D-Mo.) and Ilhan Omar (D-Minn.) were the only two House Democrats to vote against sanctioning Russia’s oil industry, while Rashida Tlaib (D-Mich.) in the runup to the invasion argued against providing Ukraine with aid.”

Another piece untangled Omar’s ties of family and business to Russia’s oil industry and Putin’s kleptocratic regime. These are potentially serious conflicts of interest, and her constituents deserve answers about the extent to which they might have influenced her vote.

For her part, Omar told followers on Twitter that her opposition to sanctions against foreign countries—and their oil industries—is a matter of principle. “I don’t support broad based sanctions on any country. They are economic warfare and we should all oppose them like we oppose military actions. Also, as humans who are interconnected to other humans globally, we will directly or indirectly be impacted by it.” To her credit, Omar condemned Putin’s invasion in February. She merely opposes “economic warfare” for moral, humanitarian reasons. Bush explained her vote in similar terms.

Alexandria Ocasio-Cortez supported the H.R. 6968 “Suspending Energy Imports from Russia Act.” However, a spokeswoman for Ocasio-Cortez described the New York Relresentative’s broad position on sanctions as a stance in line with her allegedly progressive, pro-worker policies. “The Congresswoman has long opposed overly broad sanctions that hurt working people but has spoken and voted consistently in support of targeted sanctions such as those being leveled against Putin.” 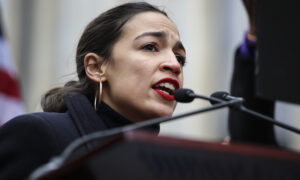 Unfortunately, the Squad’s lofty concerns for civilians and “working people” don’t extend to Israel. They are vehement, high-profile supporters of the BDS movement that seeks to weaken and isolate the Jewish State. Their hypocrisy is especially conspicuous in light of Russian crimes in Ukraine. In March, Secretary of State Anthony Blinken confirmed that Putin’s forces have indiscriminately — and at times deliberately — fired on civilian targets. Since then, reports have emerged of Russian soldiers who executed civilians, raped women, and left mass graves in their wake. If true, these reports are in line with Russian crimes against civilians in Chechnya and Syria. It is a pattern that bodes ill for Ukrainians in the invaders’ path.

Of course, Squad members Ilhan Omar and Cori Bush are well within their rights to oppose sanctions on Russia. They are free to argue, as they do, that “economic warfare” will do nothing to end the invasion or alleviate the suffering of Ukrainian civilians. But one wonders what Israeli atrocities merit the kind of sanctions even Putin has not earned. For the Squad, only Israel is beyond the pale.

These are rhetorical tactics and moral inversions as insulting as they are predictable. To many CJV readers, they will also be numbingly familiar. For decades, self-proclaimed “pro-Palestinian” and “humanitarian” Antisemites have equated Israel with Nazi Germany. Jewish suffering has become just one more cudgel with which to beat Jews. As long as Antisemitic assaults on history and the truth persist, CJV will continue to set the record straight.