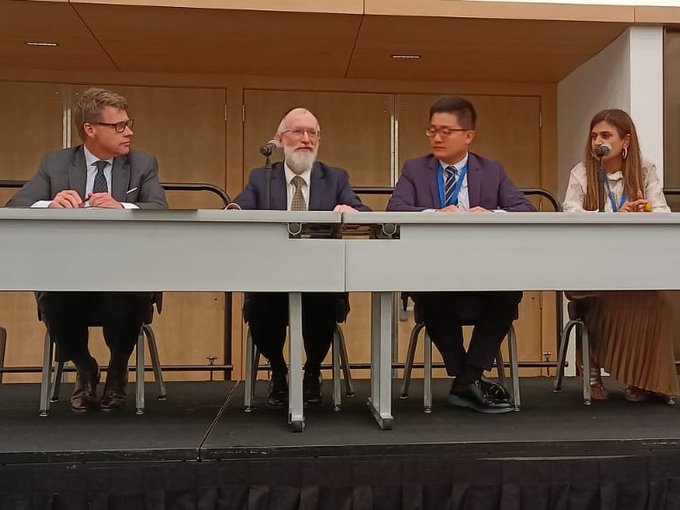 Last week, CJV joined the second annual International Religious Freedom Summit as an exhibitor and a key participant on the stage and behind the scenes. Rabbi Menken spoke at the IRF Summit’s inaugural Congress, and, as co-chair of the Global Campaign to Combat Antisemitism of the IRF Secretariat, he spoke on a panel about changing paradigms and facilitated a session regarding the recent visit to Israel by Pakistani Muslims that created an international incident.

During the Summit’s Civil Society Congress, Managing Director Rabbi Menken made a presentation on CJV’s behalf before an audience of human rights activists and campaigners from around the world. His proposal called for institutions and their corporate partners to adopt the working definition of Antisemitism developed by the International Holocaust Remembrance Alliance (IHRA). This definition is the most accurate and accepted representation of contemporary Jew-hatred, capturing in particular the key elements that characterize Antisemitism when it masquerades as “anti-Zionism.” Crucially, Rabbi Menken argued, embracing the definition will allow institutions to focus instead on the real human rights crises that demand our attention and our compassion. Anything less privileges hostility toward Jews over the defense of the persecuted.

As Co-Chair of the Global Campaign against Antisemitism, Rabbi Menken then hosted an event that best represents the campaign’s purpose and some of the most effective work in the fight to combat Jew-hatred. The discussion featured Anila Ali, co-founder and Acting President of the American Muslim and Multifaith Women’s Empowerment Council (AMMWEC), as well as several Pakistani- and Muslim-American guests who had joined AMMWEC on its history-making visit to Israel this spring. Ms. Ali’s guests discussed their visit and their own internal biases they confronted while there — because the bias they expected was nowhere to be found.

In Israel, they discovered a nation that welcomes people of all faiths and backgrounds despite the challenges it faces. What followed the visit itself, however, proved just as instructive. Ms. Ali first weathered a wave of condemnation, threats, and fatwas, but the uproar also triggered a wider, more open conversation among Pakistanis about their country’s reflexive hatred for the Jewish State.

The following day, on June 30, Rabbi Menken again shared a platform with Ms. Ali. The two appeared on a panel alongside Se Hoon Kim, Director of the Captive Nations Coalition, to discuss contemporary Antisemitism, its long history, the communities who have rejected it, the communities where it still thrives, and the those who fight it from within. The panel was moderated by Patrick Purtill, who is both Director of Legislative Affairs at Faith and Freedom Coalition and the Global Campaign’s co-chair.