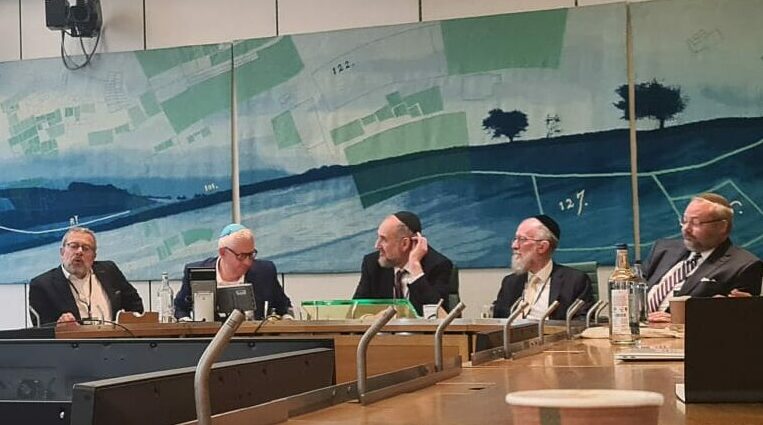 The Coalition for Jewish Values International (CJV Intl) announced today that it has joined as a stakeholder in the All Party Parliamentary Group (APPG) for International Freedom of Religion or Belief (FoRB) in the UK Parliament.

CJV Intl is the first and sole Jewish stakeholder in APPG FoRB, contributing uniquely Jewish input to this cross-party grouping of MPs and Lords, which promotes international freedom of religion or belief in government, parliament, the media, and to the general public.

“I am so pleased,” said Rabbi Guttentag, Chair of CJV Intl, “that CJV can extend further its mission of defending and promoting traditional Jewish values at Westminster now as an official stakeholder of the APPG FoRB.

“The APPG FoRB is one of the largest and most important such parliamentary groupings, and I look forward to being able to work with the officers and members to advance the cause of freedom of religion or belief — particularly in the current era where there are growing challenges to the maintenance of traditional religious observances, impacting upon the Jewish community around the world.”

APPGs are cross-party groups of MPs and Peers with a common interest that can play pivotal roles in advocacy and policy. Although APPG members are comprised of Members of the House of Lords and the House of Commons, many APPGs work with external organisations and individuals to obtain insight and expertise on a particular topic. Because of their diverse membership and cross-party nature, they can be very successful at advancing change.

APPG FoRB is one of the largest APPGs, with 22 officers and over 160 members. It works with over 20 stakeholders to ensure input from a variety of faith and belief representatives.

“I’m very encouraged to have Coalition for Jewish Values join as a stakeholder of the APPG for International Freedom of Religion or Belief,” commented the APPG FoRB chair, Jim Shannon MP. “It’s vital that freedom of religion or belief is protected for all, and I’m grateful to have input from the Coalition for Jewish Values on problems facing Jewish communities internationally and to work together to overcome these challenges. Now, more than ever, it’s important to work together with different faith groups to promote freedom of religion or belief, securing it for future generations.”

As a follow up to an event earlier this year, and with the encouragement and involvement of CJV Intl, the APPG FoRB is holding an event “Legislative threats to freedom of religion or belief in Europe,” on Tuesday, 29th November 2022 from 5-6 pm, in Committee Room 6 of the House of Commons. The APPG FoRB invites all to attend, but places are limited. Readers are invited to contact Rabbi Jonathan Guttentag, Chair of CJV Intl, at 07980 262 767 for further information before a formal RSVP to [email protected]