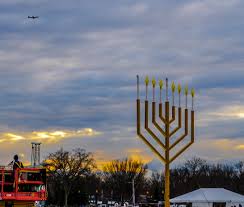 by Rabbi Dov Fischer in the Israel National News

I have a close non-Jewish friend. Neither of us fears insulting the other if we ask sincere questions to slake our curiosity. One year he asked me: “Dov, honestly, what’s with the Hannukah thing? With us, December 25 is a miracle birth; Easter is someone arising from the dead. Help me understand why you guys make such a big thing about — basically — a light bulb lasting an extra week. What’s the point?”

Fair question. Here is why:

Secondly, Hanukkah is not Judaism’s entry in the “Winter Solstice Feel Good Let’s Decorate with Colored Light Bulbs” season. It is not a variation on Christmas or Kwaanza, whose contemporary lessons are that it is useful to give presents before the tax year ends and yule logs are nice on dark winter nights. Rather — news flash! — Hanukkah parochially celebrates the unique eternal love G-d has for the Jewish people, a love that He often reinforces by leaving behind his “thumbprint” as if to say “You may not have noticed, particularly amid your horrible travails, but I was here. I never left you.”

Not all miracles are publicly obvious. Yes, sometimes a Sea of Reeds splits before the eyes of our entire nation, saving us from cataclysmic horror. Sometimes a Jordan River splits so the nation can enter the Promised Land, a destination for which we have peregrinated through desert sun and sand for nearly forty years. Yehoshua 3:14-16. Sometimes the waters part miraculously — but more privately — to accommodate a unique Tzadik (righteous person). So the waters parted for Yaakov Avinu (Jacob) (B’reishit / Genesis 32:11) and for Eliyahu HaNavi Zakhur LaTov (Elijah). Melakhim Bet / Kings II 2:8). However, many of G-d’s miracles are easy to overlook completely as He hides His face for His reasons.

Perhaps Megillat Esther is the quintessential example of G-d hiding His face while performing miracles-upon-miracles to save the Jewish people. Thus, it “just so happened” that a king got so drunk at a major celebratory event that he made a vile demand of his wife. It “just so happened” that, instead of her refusing in a private and genteel tone, she responded with a forthright rebuke intended for all the king’s highest echelon to hear:

Rava said: Vashti not only refused to come, but she also sent him a message by way of a messenger: “You, son of my father’s stableman. Belshazzar, my father, drank wine against a thousand men and did not become inebriated . . . but [you] have become senseless from [your] wine.” (SeeDaniel 5:1: “Belshazzar the king made a great feast to a thousand of his lords and drank wine before the thousand.”)

For G-d-fearing and G-d-loving Jews, we gain by developing the skill of to divine G-d’s least manifest miracles. Did Purim’s story “just so happen”? Actually, the Gemara tells us that, by calculated design, G-d caused a master (Pharaoh) to become infuriated with two of his servants (the wine steward and the baker), and He caused two servants (Bigtan and Teresh) to become infuriated with their master (Achashverosh) — all for the sake of advancing the destiny of the Jewish people.

Back in 1991, during Operation Desert Storm, the war in which America amalgamated an international alliance to push Iraq’s Saddam Hussein out of Kuwait, major news media “embedded” their journalists to accompany the troops. In the black of night, when no one naturally could see much ahead, the advancing troops nevertheless could see clearly through the piercing darkness, and the television journalists even could transmit midnight news footage, albeit tinted green, home to TV viewers because the journalists and troops had the benefit of specially manufactured night-vision goggles.

We should challenge ourselves to emulate them, instead by evolving within ourselves the ability to see G-d’s hidden miracles by dint of what I call the “Green-Tinted Goggles of Faith.” The miracles are there to see; you just need the goggles.

For example, there was another famous candle that miraculously remained aflame seven days longer than the laws of nature can explain: our matriarch Sarah’s Shabbat candle that she lit in her tent to welcome each week’s Shabbat observance. Her candle remained kindled all week until lighting time arrived the following Friday evening. When she died, her tent went dark. And then Yitzchak (Isaac) married Rivkah (Rebecca). When Rivkah lit her Shabbat candle, the miracle revived. Once more, the tent miraculously remained lit all week. B’reishit Rabbah 60:16 on B’reishit 24:67. A candle that lasted seven days longer than can be explained by science.

So what was that about? For those with green-tinted goggles of faith, it was not a necessary miracle like a sea splitting just before Pharaoh’s army could wipe us out or take us back to Egypt as slaves. It was not a necessary miracle to clear a path for Yaakov, Yehoshua, a wandering nation, or Eliyahu and Elisha to get to the other side. It simply was Hashem leaving His “thumbprint”: “I am here.”

One of the most horrific tragedies in our history was the fall of Beitar, Shimon Bar Kochba’s final fortress in the 132-135 C.E. war with Rome. When Beitar fell, all fell. We would be exiled for the next two thousand years. It was our last stand, some sixty-plus years after the fall of Masada. This time the Romans were determined to destroy our spirits and gut our hope that we ever again would be sovereign in Israel. Not only did they change the name of our land of Israel to “Palestina,” reverting to the long-since-removed Philistines, but they viciously ordered that the bodies of all Jewish soldiers who had fallen be piled outside to rot publicly. They wanted the remaining Jewish survivors to see the rot, smell the stench, and infer that the G-d of Israel was not with them, perhaps never had been. Alongside destroying us physically, the Romans thereby would crush us spiritually.

But something inexplicable unfolded. The bodies did not rot. The corpses did not smell malodorous. Rather, they remained fresh. Instead of the mounds of corpses testifying to G-d’s absence, those bodies came to evidence His miraculous presence among the Jewish people, even amid the depths of catastrophe. This miracle — thousands of piled corpses that would not decompose — gave so much hope to our defeated people and revived our spiritual strength so robustly that Chazal (our Rabbinic Sages of Yore) composed an additional brakhah for bentsching, the fourth blessing in Birkhat HaMazon (the grace we recite after meals with bread). Mesekhet Berakhot 48b. Yes, Rome had crushed Beitar, but G-d left his thumbprint — “I am here with you” — visible with the green-tinted goggles of faith.

All of which returns us to Hanukkah, the menorah, and the miracle of the cruse of olive oil that barely would last for one day but miraculously remained aflame seven additional days. Mesekhet Shabbat 21b. Still, as my non-Jewish friend respectfully asked: “What’s the point?”

The point is that we had been persecuted by the Greeks. They had subdued us, Hellenized too many of us, and conquered our Beit HaMikdash (Holy Temple). Where was G-d? And then, the Hasmonean dynasty — the Maccabees — rose up in revolt, drove them out, and eradicated Greek perversions from the Temple. Had that victory been a purely military win, the result of better training, more intense fierceness, and more skilled generals? Indeed, in our lifetime, we saw many foolishly interpret the miracles of the 1967 Six-Day War that way: “Israelis are better soldiers than Arabs. American weapons are better than Russian materials. Jews are smarter than Arabs.” And then the 1973 Yom Kippur War humbled those misconceptions. The victories of 1967 — and of 1973 — indeed had been Divine miracles.

Thus Hanukkah. We were not smarter than the Greeks who gave the world Socrates, Plato, and Aristotle. Our military skills and weapons were not keener, nor our men braver, than those of a Greek empire that dominated the world. Rather, G-d had been with us all along, through the persecutions and through the ensuing victories. It was not we but He who drove out the Greeks and restored the Heikhal (Temple sanctuary) when the apt moment arrived on His timetable.

He left behind His thumbprint, in this case, a candelabrum whose flicker, by all rules of physics, should have extinguished after one day but instead lasted an extra week until new sanctified oil arrived. The “thumbprint” on the menorah (so to speak) could be discerned clearly with the green-tinted goggles of faith: “I am here with you, My people. I was here with you. I always will be with you, My people. No matter how joyous or bleak certain times may be, know that I always am here with you.”

And all the while, the Jewish population of Judea and Samaria, including the eastern regions of United Jerusalem that were liberated in 1967, has continued bursting, growing to nearly one million Jews. Right under our noses, one of G-d’s greatest miracles in all of recorded history has been unfolding. As He hardened the Pharaoh’s heart, assuring that Egypt unwittingly would make the Exodus inevitable, so He miraculously hardened the hearts of Arafat, Abu Mazen (Mahmoud Abbas), Hamas, and the rest of them, making it impossible for Israel’s Leftist leaders from Golda Meir and Moshe Dayan to Tzippi Livni and Yair Lapid to cede Judea and Samaria, no matter how hard they have tried to capitulate, even in the earlier years when it was logistically possible to do so.

And now, after half a century of Arab intransigence, with almost a million Jews “in the way over the green line” needing to be uprooted and relocated, the miracle is complete, and the message is the same: