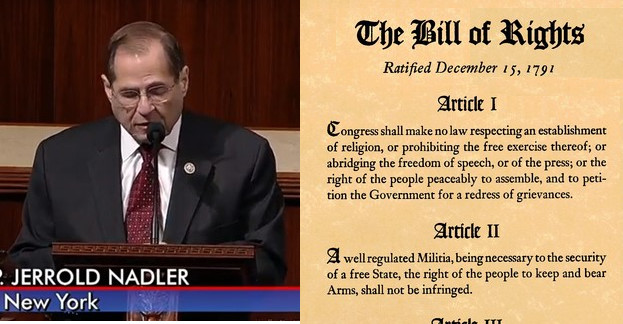 The Coalition for Jewish Values (CJV) today harshly rejected, on both moral and Constitutional grounds, the claim by Congressman Jerry Nadler (D-NY) that “what any religious tradition describes as G-d’s will is no concern of this Congress.” Nadler made this statement on the floor of the House of Representatives last Thursday, rebutting Rep. Greg Steube (R-FL) who had said that the Equality Act, which passed the House that day, does not “reflect the standards of G-d.”

“Mr. Nadler has forgotten the Constitution,” said Rabbi Pesach Lerner, President of the CJV. “The Founding Fathers required Congress to avoid infringing upon the free exercise of religion, meaning it must be sensitive to what every religious tradition describes as G-d’s will. It is especially true that Congress must remain cognizant of the set of foundational moral principles – including valuing peace, human life, and individual liberty and responsibility – that America calls Judeo-Christian ethics.”

The Rabbinic group, representing over 1500 traditional, observant rabbis in matters of public policy, called the Equality Act itself “a disgraceful attack upon Jewish Biblical beliefs” in a letter to Congressional leaders released to the public last Thursday. “The Equality Act expressly declares that the Book of Genesis [see 2:24] and all of the Jewish laws pertaining to marriage as a sanctified union between man and woman… are nothing more than engagement in discriminatory stereotypes,” said the letter.

“Mr. Nadler has unmasked the true nature of the Equality Act,” commented Rabbi Yoel Schonfeld, Vice President of the CJV. “Far from valuing diverse opinions and beliefs, it tramples free exercise of religion and even demonizes free speech. Reading the Bible in public, per the Equality Act, could be called an exercise in bigotry and grounds for a ‘discrimination’ complaint. Without question, the true bigots here are those who support deliberate attacks upon the cherished beliefs of others.”